grønstrøm.nu: How green is the electricity right now?

Time to announce another weekend project, and this time hopefully one that will be a bit more useful than most of them: By providing an overview of the emission costs of using electricity in Denmark, grønstrøm.nu allows people to immediately decide whether or not to postpone their electricity-heavy activities to a time where those activities would be greener.

The web app achieves this by making it easy for people to provide the length of the activity, and their flexibility in terms of how long they are willing to wait. Examples of such activities could be doing the laundry, running the dishwasher, baking a cake, or charging the car. 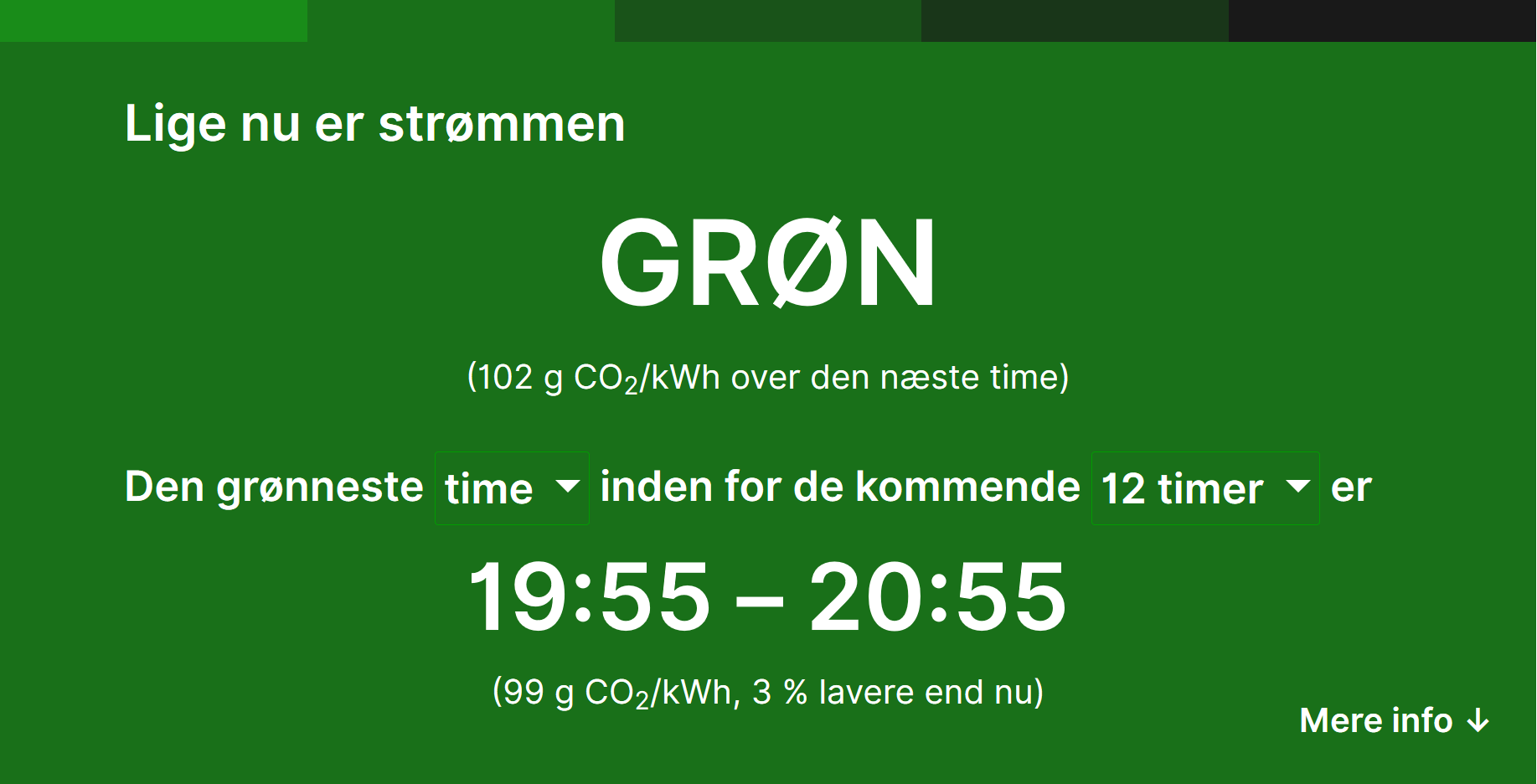 The main source of inspiration for the project came from a discussion with a colleague of mine, Tobias Møller Ruby, who was working on building a gadget: A traffic light showing the current intensity, so that he would know his own impact when using electricity at any given time.

This sounded like a great idea; so much so that it seemed like everyone should have such a thing. Distributing several million Arduinos seemed a bit overwhelming though, so instead, grønstrøm.nu aims to make it as straightforward as possible for people to get the same information, by presenting it in such a way that you only need to pick your phone out of your pocket to get it.

Its current form is the result of multiple iterations with Tobias and a bunch of extremely helpful testers who helped pinpoint potential use cases and how to cater to those as efficiently as possible.

Other projects have worked towards similar goals; the presentation here is inspired by Andrew Pairman's Shift which uses the British Carbon Intensity API to produce an overview. The WWF offers a similar widget, and electricityMap provides a global perspective on the same information.

The relevant data was available through the Danish grid operator Energinet who also provide visualizations of their forecasts, and some electricity providers provide the information as part of their packages.

Being able to visualize the forecasts is great, but noone seemed to attack the underlying UX problem of turning the data into decision making in a way that is as accessible as possible for as many as possible. Doing so is the main goal of grønstrøm.nu, and while you could geek out endlessly on the data, the app itself is explicitly kept as simple as possible, with geekier distractions deferred to side projects. 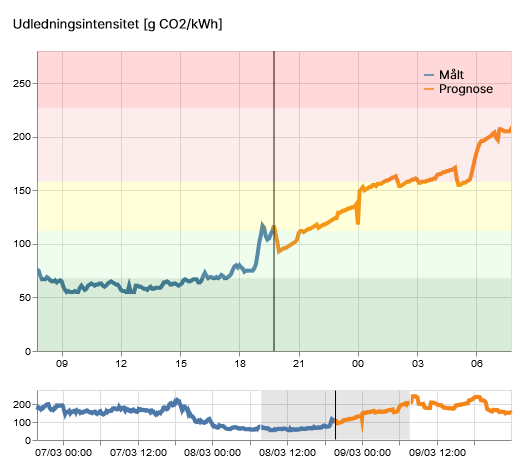 I am sure it is possible to take this idea even further: In an attempt to get rid of the manual step of opening the app, the Chrome and Firefox versions of the app provide push notifications, and tailoring these to individual people's needs seems like an obvious next step, as is making the functionality work on iOS. At the same time, people get their information through several sources; a few people have already asked for integrations with their favorite IoT setups, and making the information available through other channels is also natural. In time, we will see which ones to focus on, but already in its current form did the app seem popular enough that not sharing it seemed like a shame.

And we will get there, in time, but already in its current shape, the app seems useful enough that it would be a shame not to share it. 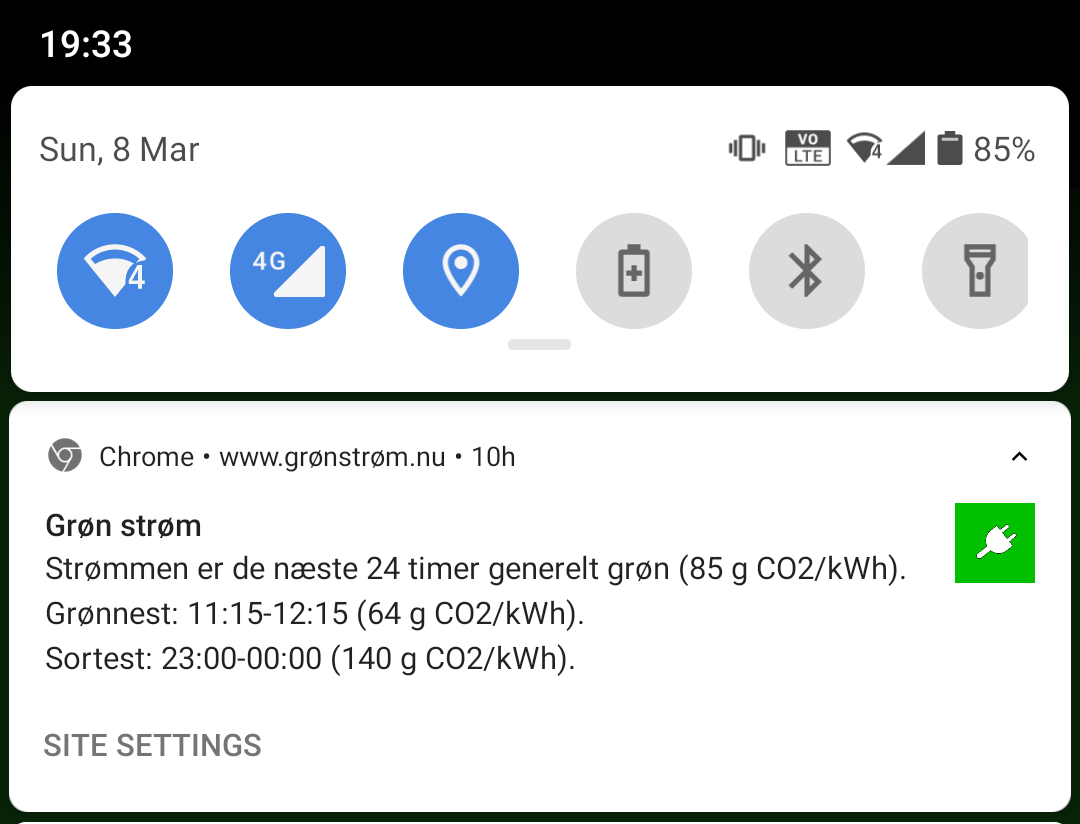 At the same time, there is a natural tendency for people to correlate the data with prices: Luckily, having a large share of green electricity in the mix tends to mean low electricity prices, but we have explicitly avoided any reference to power prices. Similarly, the app itself is as non-profit as they get, with the only capital involved being my own hosting expenses. Development also happens in the public, with all activities documented on GitHub. Even before this announcement, the project saw its first external GitHub pull request, and since you are reading this, chances are that you yourself is into coding, so if you feel like working on some Python/Flask/Altair/Pandas/Redis/JavaScript/Service Workers/Docker, maybe there is something for you in here as well!