Towards the end of the month of June, Google released the Python source code for deepdream: A piece of software which allows for the visualisation of the potential of a collection of artificial neural networks set up for image recognition. I can't exactly claim that I dug into the technical details, but Google produced a blog post which explains in rough terms the capabilities of the software, and what is going on. Let me not attempt to reproduce that as I would not be able to do a better job than Google anyway.

Basically, the overall objective is to recognize given objects in arbitrary images. Deepdream allows insight into what the algorithms applied actually find as the findings are emphasized in the original test images. With this, one can do as I – and a huge number of other people – did, and fire up the code to produce some very silly art.

The picture below is the result of running a photograph of Svartifoss through the GoogLeNet network; Google's contribution to an image recognition competition that ran last year. Click the image to see a bigger version. (Do it!)

One of my personal favourites is the following result of running through a given layer of the network at various numbers of iterations a photograph of a bonfire: 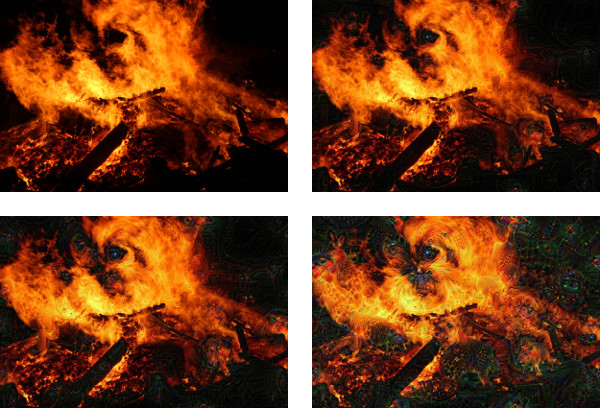 Another thing one can do – also included in the before-mentioned freely available example – is to iterate the recognition process while zooming in on a given point of the image. In my vanity, I asked deepdream to check the contents of one of my eyebrows:

If the reader wants to play around with deepdream themselves, it is not difficult to find setup guides for various systems. Personally I found this guide for Debian useful. The only problem I ran into was that Caffe currently struggles with g++ 4.9.

When compiling, note that it takes an NVIDIA card to run Caffe on the GPU.